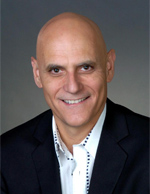 On March 29, 2013, we had a wonderful interview with Steven Hayes, PhD, Nevada Foundation Professor of Psychology at the University of Nevada, founder of Acceptance and Commitment Therapy, and internationally-known author of 500 scientific articles and 36 books, including the best-seller Get Out of Your Mind and Into Your Life: The New Acceptance and Commitment Therapy

ABOUT GET OUT OF YOUR MIND AND INTO YOUR LIFE: THE NEW ACCEPTANCE AND COMMITMENT THERAPY

Picture Assistant Professor Steve Hayes, an accomplished, well-pedigreed PhD Clinical Psychologist in a faculty meeting at the University of North Carolina-Greensboro, where a heated debate is developing in a charged atmosphere, reflecting the widening chasm between behavioral and information-processing-oriented cognitive faculty. 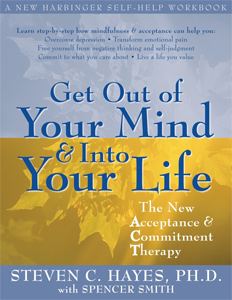 Steve opens his mouth to contribute, and is suddenly unable to talk. His heart is racing. He is only 29 but thinks he’s having a heart attack. Similar panic episodes occur in other meetings with increasing frequency over the next two years, forcing him to withdraw from his teaching duties and limit his activities to avoid attacks. He has developed a full-blown anxiety disorder.

Living through an intensely painful two years, Steve was able to use his skills and training to explore solutions for himself. He observed that trying to analyze his core beliefs and reframe them more accurately (as might be done in Cognitive Behavior Therapy) only made his panic disorder worse. And so he brought in alternatives, combining practices like meditation and mindfulness learned in his New Age college days with his scientific and research background. It seemed helpful to him to witness thought processes from the perspective of a detached observer and to accept that they couldn’t be silenced permanently. If he struggled with changing powerful beliefs and negative thoughts, he only felt more imprisoned and controlled by them.

Steve began developing the model that underlies today’s Acceptance and Commitment Therapy. Over the years, he was able to eliminate his panic attacks altogether, but ACT is much more comprehensive than his experience. His lab became the center for research on how rules affect behavior, on psychological flexibility and on the effects of verbal problem solving, leading to an account of language called Relational Frame Theory (RFT: see Resources below). ACT was modified to focus on reducing the impact of thoughts regardless of their content. It took at least a decade to begin publishing findings.

Steve’s book, Get Out of Your Mind and Into Your Life, summarized his research and methods in a highly popular lay manual. It also pushed Steve further into the bitter debates that occur in psychology over best practices in treatment modalities.

What has emerged from numerous and broadly research studies is a solid, research-based model that can be applied to a wide spectrum of health and wellness issues, including anxiety, depression, chronic pain, control of seizures and psychotic thoughts, weight management, and addiction.

And what’s involved in Acceptance and Commitment Therapy? Detachment from negative thoughts and powerful beliefs is achieved through mindfulness practices including simple observations of thoughts. And while these thoughts and beliefs and the pain they cause cannot be completely eliminated, they can be placed under better control when they recur.

The focus of therapy then becomes identifying and committing to personal values and finding ways to live in accordance with them. ACT therapists may have clients write epitaphs, give definitions of what they envision for the future, figure out what gives life meaning or what they want to learn, and rate how their everyday actions reflect their values. All of these key activities will sound familiar to most coaches as well.

Steven C. Hayes, PhD. is the Nevada Foundation Professor of Psychology at the University of Nevada. An author of 36 books and over 500 scientific articles, his career has focused on an analysis of the nature of human language and cognition and the application of this to the understanding and alleviation of human suffering. As part of this effort, he developed “Acceptance and Commitment Therapy” a powerful therapeutic approach that can not only be applied to disorders such as depression, anxiety, and weight control, it is also eminently useful in coaching. His popular book Get Out of Your Mind and Into Your Life was featured in Time Magazine, and for a time was the number one best selling book in the United States, with ratings even above Harry Potter.

In 1992 he was listed by the Institute for Scientific Information as the 30th “highest impact” psychologist in the world and received a 2007 ranking as the 9th most productive clinical faculty person (out of 2000) in the U.S. His work has been recognized with numerous awards including the Exemplary Contributions to Basic Behavioral Research and Its Applications from Division 25 of APA, the Impact of Science on Application award from the Society for the Advancement of Behavior Analysis, the Lifetime Achievement Award from the Association for Behavioral and Cognitive Therapy.
Steve grew up in Southern California and gravitated towards the field of psychology in high school because it allowed him to combine his interests in the humanities and science. At Loyola Marymount University, from which he graduated in 1970, he considered himself a part of the counter-culture of the times, with long hair, an interest in spiritual exploration and the transformation of self and the world. He was most impressed by B.F. Skinner, having developed an early interest in behavior analysis as well as cognitive-behavior therapy.

Following a stint building a friend’s house while living on a religious commune, he moved into environmental and political activities, and eventually set his sights on graduate school. However, the process of getting admitted was delayed (he determined later) by one unfavorable reference letter from a professor who had associated his long hair with being part of the drug culture. After persevering over 3 years and receiving almost 40 rejection letters, Steve was accepted at West Virginia University, a stronghold for Behavioral Analysis, receiving his PhD in Clinical Psychology in 1977. Interestingly, he found himself turning down faculty job offers from some of the very schools that refused to admit him earlier. 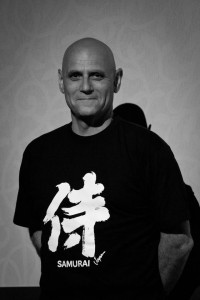 In his 11 years as a faculty member at the University of North Carolina-Greensboro, Steve and his associates generated key research studies on cognitive methods and change processes and explored acceptance, diffusion, and mindfulness methods that contributed to the formulation of Acceptance and Commitment Therapy (ACT). Initial applications of these and other methods to problems of anxiety, depression, and weight management showed promise.

Steve migrated to the University of Nevada at Reno in 1986. Over the last 25 years, he established himself as the leader in a “third wave” of behaviorally-based therapies (the first being B.F. Skinner’s and the second Beck and Ellis’s Cognitive Behavioral Therapy) by founding and presiding over the still-growing Association for Contextual and Behavior Science. Though he served as Director of Clinical Training and then Chair of his Department for 17 years, much of his energy has gone into creating, refining, and writing about a model of psychopathology and intervention based on ACT principles and researching its application to a wide variety of mental and physical health conditions.

Steve lives with his wife Jacque and is the proud father of four children ranging in age from 5 to 41, with the oldest 3 successfully launched into the world of art, film and communications. He has spent years relying on his motorcycle to get him through ice, snow, sleet and rain before purchasing a Chevy Avalanche, and is known for his odd costumes when he’s not wearing jeans. Though he’s been labeled as “the epitome of the Absent-Minded Professor, he’s still committed to changing the world through ACT. He’s been described as charismatic, brilliant, and a maverick.

Above all, Steve is authentic, and lives with humor. In order to join the Air Force ROTC his first year of college, Steve prepared by eliminating his 12” long locks, the only such hairstyle in his all-male school. When he walked into the cafeteria after the haircut, he received a spontaneous standing ovation from the student body. He lasted only one week in the ROTC. But by his senior year, there were hundreds of long-haired hippies on campus, including Steve who had regrown his long hair. A look at his more recent photos suggests that he no longer has to worry about bad hair days.

Career Influences and a Brief Intellectual Autobiography by Steve Hayes. Informal and excellent.

Amazing resources for professionals, including ACT info and handouts, clinical tools, conference talks, and training materials are on Steve’s Association for Contextual Behavior Science (ACBS) website and even more materials can be downloaded after registering on the general ACBS site

Members of the public reading ACT self-help books (e.g., “Get Out of Your Mind and Into Your Life” ) can join a listserv for ACT

Steve has many video recordings available on his website. Some useful selections include a 3 minute review of ACT’s usefulness in problem solving, and two 22 minute interviews of Steve by Tim Lavin for a Nevada ABC affiliate. The first is focused on how ACT works with chronic mental and physical health issues, and the second is about understanding happiness and pain, and using ACT in daily life.