Alex has written, co-written, or edited more than 120 research articles and book chapters, and five books. His newest book, co-authored with Janet Willars and Robert Biswas-Diener, is The Strengths Book: Be Confident, Be Successful, and Enjoy Better Relationships by Realizing the Best of You.

Alex is also an extraordinary teacher (We’re proud that he taught two master classes for us!), articulate, and unpretentious. This should be a cool, fun hour.

THE RECORDING: To receive your copy of the digital recording of Alex’s interview, just type your name and email address below. You’ll receive my email–with a link to the recording–within a few minutes.

Alex Linley, Ph.D. is a psychologist and social entrepreneur. After time spent working first in business and then in academia, in 2005 Alex founded the Centre of Applied Positive Psychology, where he is now Director. CAPP is a social business, registered as a not-for-profit company limited by guarantee, and is focused on the applications of strengths in organisations and schools. CAPP’s profits are reinvested in its mission of Strengthening the World, a mission which is also supported through the charitable works of The Strengths Project, of which Alex is a Founding Trustee. 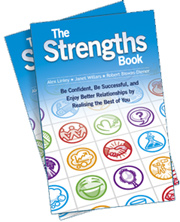 He has written, co-written, or edited more than 120 research articles and book chapters, and five books, including Positive Psychology in Practice (Wiley, 2004) and Average to A+: Realising Strengths in Yourself and Others (CAPP Press, 2008). He is an Associate Editor of the Encyclopaedia of Positive Psychology and the Journal of Positive Psychology, as well as Co-Editor of the International Coaching Psychology Review, and a regular reviewer for a number of journals, publishers, and grant awarding bodies. His newest book, co-authored with Janet Willars and Robert Biswas-Diener, is The Strengths Book: Identify Your Strengths, Be Confident, Be Successful, and Enjoy Better Relationships by Realising the Best of You.

Alex lives with his wife and their four children in Coventry, a city in England, 95 miles (153 km) northwest of London.