Interview with Karl A. Pillemer, PhD 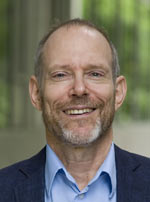 On February 27, 2015, we had a Q&A Interview with Karl Pillemer, a renowned sociologist, gerontologist, and author of a new best-selling book, 30 Lessons for Loving: Advice from the Wisest Americans on Love, Relationships, and Marriage.

You’ll also receive a complimentary subscription to our monthly email newsletter,
The eMentorCoach News. You can unsubscribe at any time.
Your privacy and email address are safe with us.

ABOUT 30 LESSONS FOR LOVING: Advice from the Wisest Americans on Love, Relationships, and Marriage 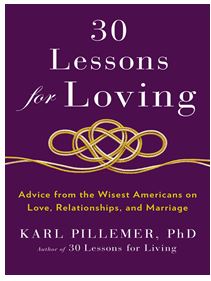 Karl Pillemer’s latest book is an in-depth investigation into one of the most talked about parts of his previous book, 30 Lessons for Living: Tried and True Advice from the Wisest Americans. The book, often purchased for the chapter on love, relationships, and marriage, passed sage advice and stories from seasoned elders to the younger generation just embarking on the journey. Many who purchased the earlier book sent requests for more than a chapter on these important topics.

Accordingly, Pillemer focused his research (called the Marriage Advice Project) on seven hundred older Americans, interviewed in-depth, who were currently in long marriages or whose long marriage had ended with the death of their spouse. Interviews were also conducted with individuals who had divorced or who had chosen to stay in an unfulfilling relationship for decades.

The result, based on the most detailed survey ever done of people who are long-married or committed partners, 30 Lessons for Loving shows the way to fulfilling relationships that last a lifetime.

Seeking wisdom from a very diverse sample of the long-coupled (labeled “the experts”), Pillemer asked for advice on all the big questions as well as many of the smaller ones, including these:

Pillemer summarizes strategies for communicating in the most constructive ways during conflict (even for those who prefer not to talk), keeping the spark alive over the years, and accepting spouses the way they are.

So what are the secrets to a long and happy marriage? And how do you find the right partner in the first place? Some findings from the “experts”:

This is a book for people at any stage of partnering–or for those who are hoping to start and maintain a long relationship. The advice and stories from participants in Pillemer’s research interviews, who taken together had accumulated around 25,000 years of married life, is invaluable and inspiring. And Pillemer’s ‘Five Lessons,’ including commentary on the “discipline of marriage,” the importance of teamwork, the need to “lighten up,” and the effect of constant recommitment is indeed sage guidance towards a fulfilling long-term relationship.

“I loved 30 Lessons for Loving. It’s a treasure trove of great advice from some of the wisest people in the world. They’ve experienced just about everything in their relationships over the years, and their advice to us is both enlightening and enriching.” -Hal Urban, author of Life’s Greatest Lessons and Positive Words, Powerful Results

“Karl Pillemer presents the wisdom of the ultimate experts in relationships, those who have made love and marriage work over the long run by learning from their mistakes and striking a viable balance between their hearts and minds.” – Steven Stosny, PhD, author of Living and Loving After Betrayal and How to Improve Your Marriage Without Talking About It

“30 Lessons for Loving is a real contribution for helping us make important decisions about relationships, and nurture love once we have someone we treasure.” -Pepper Schwartz, PhD, author of The Normal Bar: the Surprising Secrets of Happy Couples

This rich and revelatory book offers us a rare gift: vivid narratives born of struggle and resilience, hard work and humor, and forged out of mutual respect, loyalty, and love.” -Sara Lawrence-Lightfoot, EdD, author of The Third Chapter: Passions, Risk, and Adventure in the 25 Years After 50

“There’s one thing in life that cannot be rushed–experience! So the wise listen to those who have gone before them, eager to learn what they can from the experience of others. The experience of others shows us the path of joy, and warns us away from the paths of anguish and pain. I thoroughly enjoyed 30 Lessons for Loving; it contains ten thousand years of experience.” – Matthew Kelly, author of The Dream Manager and The Rhythm of Life. 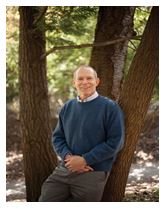 Karl A. Pillemer received his B.A. from Boston University and an M.A. and Ph.D. (1985) in Sociology from Brandeis University. He currently serves as the Hazel E. Reed Professor in the Department of Human Development and Professor of Gerontology in Medicine at the Weill Cornell Medical College.

Karl is director of the Cornell Legacy Project, several interrelated studies which have collected interview data for over 6 years from over 1200 older Americans about what’s involved in living life well-from the perspective of their experience, what matters most in life, and how to overcome its obstacles.

Considered one of of America’s leading family sociologists and researchers on aging, Karl realized about a decade ago that, while he had spent most of his career focusing on the problems of older people, he tended to view older people as problems.

He explains: “I had been studying issues like disability, chronic pain, and dementia. It suddenly hit me that I needed to focus on older people as critically important sources of wisdom and insight. So I went on a decade-long quest to find out what older people know about living happier and more fulfilling lives that the rest of us don’t, and to share their advice with younger people.”

Karl is the founder and Director of the Cornell Institute for Translational Research on Aging, a center that conducts and integrates research and develops programs to improve the quality of life for older people. He has authored more than 100 scientific publications, is a Fellow of the Gerontological Society of America, and has served in leadership roles in a number of scientific organizations. He is a recipient of the Gerontological Society’s Lawton Award, a distinguished honor that recognizes a significant contribution in gerontology that has led to innovations that improve the lives of older persons.

Throughout his career, Karl’s research has focused on how family relationships develop and change throughout their members’ lives. His studies have examined issues like the causes of marital happiness and conflict, how parents get along with their adult children, and the effects of illness and caregiving on families. His research takes place in the real world of families and professionals who work with them. He has created many model programs designed to help address the problems of families, such as projects that reduce the burden and stress of family caregivers, and developing prevention programs for reducing family conflict.

Karl’s research interest and contributions in later life intergenerational relations has led him to receive funding from the National Institute on Aging, for which is currently conducting a large-scale study on the determinants and consequences of the quality of “adult child-older parent” relationships. Another long-term research program funded by NIH focuses on the nature and dynamics of family caregiving for impaired elderly relatives. He also directs other ongoing research on relationships with staff and families of long-term care residents and on conflict and abuse in families of the elderly.

Karl counts among his greatest accomplishments his work translating research findings into understandable prose for non-academics. He has published ten books for non-academic audiences. He has created the Evidence-Based Living web site, which provides non-technical reports on research for lay people. He speaks widely throughout the U. S. and internationally on issues of successful aging, family relationships, and elder care, among other topics. He has been interviewed by The New York Times, Washington Post, USA Today, Chicago Tribune, PBS Newshour, Marketwatch, AARP Radio, and many other major media outlets. He blogs regularly for the Huffington Post.

Karl’s earlier book using findings from the Legacy Project was the well-received 30 Lessons for Living: Tried and True Advice from the Wisest Americans. (Ben Dean interviewed Karl about this book in the MentorCoach Thought Leader series on 4/27/12). This book is a distillation of what older adults consider most important to tell future generations about life. Stories and insights of the older Americans were introduced to illustrate Karl’s research summaries and interpretations, and he distilled their practical advice–applicable to all age levels on big topics such as marriage, raising children, careers, happiness, and aging well.

Karl has been married for 36 years to his high school sweetheart, Clare McMillan, who is an Assistant Dean at Cornell University’s School of Arts and Sciences in Ithaca, New York. They have successfully raised two daughters, now adults. Karl and his wife began running marathons together in their 50’s and continue–just for the joy of it.

He Asked 1500+ Elders For Advice On Living And Loving. Here’s What They Told Him. Huffington Post, January, 2015.

Secrets to a successful marriage from 700 retirees, Interview on CBS News, Video, about 6 minutes, January, 2015.

The Willis Report, Video of interview on Lessons for Loving, about 4 minutes, 2015

Articles appeared in the January, 2012, New York Times and Chicago Tribune, and in the February, 2012 The Washington Post. Also, George Noory interviewed Karl about the Wisdom of Elders on Coast-to-Coast’s 2/5/12 show (audio recording).

The Legacy Project website is chock full of information and events related to his books, 30 Lessons for Living: Tried and True Advice from the Wisest Americans. Read inspirational stories and view video clips and photos taken in some of the 1000 interviews.

Interviews with the elders in Karl’s research, video, about 1.5 minutes, 2011

PBS News Hour, Video of interview on Lessons for Living, about 6 minutes, 2012

See Karl’s video appearance on the PBS Newshour, and listen to his interview on the Tapestry program with the Canadian Broadcasting System (under Lessons for Living)

Karl’s blogposts appear in The Huffington Post, CNN, Beliefnet, and The Week Magazine.