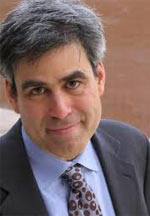 On March 9, 2012, we had a wonderful interview with one of the leading figures in positive and moral psychology, Jonathan Haidt, Ph.D. author of the new book, The Righteous Mind: Why Good People Are Dividied by Politics and Religion.

Jonathan Haidt Explains Our Contentious Culture in a Bill Moyers Interview from BillMoyers.com 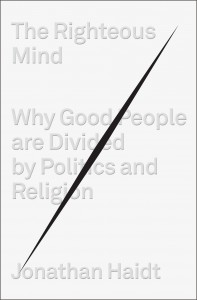 Jonathan Haidt is a Professor in the Social Psychology area of the Department of Psychology at the University of Virginia (UVA) in Charlottesville. For the 2011-2012 academic year, he is serving as the Henry Kaufman Visiting Professor of Business Ethics at the NYU-Stern School of Business in New York City.

He studies morality and emotion, and how they vary across cultures. He is also active in positive psychology (the scientific study of human flourishing) and studies positive emotions such as moral elevation, admiration, and awe.

Jon has received numerous honors and awards for teaching, including the All University Teaching Award at UVA, and the Outstanding Professor Award in the UVA Department of Psychology for two years. During his long tenure at UVA, he has served as Visiting Professor for Distinguished Teaching at Princeton University and a Visiting Distinguished Fellow at the UC-Santa Barbara Sage Center for the Study of the Mind. 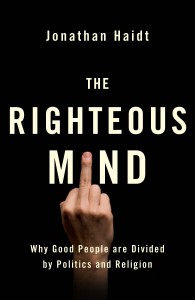 In 2001, Jon was already a recognized leader in the emerging field of Positive Psychology, receiving the $100K Grand Templeton Prize in Positive Psychology. In 2002 with Corey Keyes, he co-edited Flourishing: Positive Psychology and the Life Well Lived. Then in 2005, he published the highly-acclaimed book, The Happiness Hypothesis: Finding Modern Truth in Ancient Wisdom, which integrates philosophical questions and ideas from world civilizations with current scientific research to extract lessons about meaning and happiness that can be applied to modern life.

In addition to presenting at countless academic conferences, Jon has generated many dozens of scholarly articles on moral and social psychology, some of which have been cited over 500 times in the literature. He contributes regularly to the popular press as well as radio and TV broadcasts. Most recently, in the midst of election primaries and debates, he was interviewed on the popular Bill Moyers show about how Conservatives and Liberals view the world.

Ben’s upcoming interview will focus primarily on Jon’s soon-to-be published book outlining the variety and breadth of moral foundations and the way they influence groups-both in terms of building group identity and blinding a wider perspective that would lead to more cooperative resolutions. Considering the current political climate of demonizing, polarization, and conflict evident in the primary process, debates, and ongoing Congressional logjams, The Righteous Mind: Why Good People Are Divided by Politics and Religion is indeed a timely contribution.

“The initial organization of the brain does not depend that much on experience. Nature provides a first draft, which experience then revises.”- quoting scientist Gary Marcus

“Sports is to war as pornography is to sex. We get to exercise some ancient, ancient drives.”

“While the political right may moralize sex, the political left is doing it with food. Food is becoming extremely moralized nowadays, and a lot of it is ideas about purity, about what you’re willing to touch, or put into your body.”

“The great conservative insight is that order is really hard to achieve. It’s really precious, and it’s really easy to lose.”

“If you want the truth to stand clear before you, never be for or against. The struggle between for and against is the mind’s worst disease.”- quoting Zen master Seng-ts’an

Interview with Bill Moyers on February 3, 2012.

Why We Celebrate a Killing Jon Haidt on the death of Osama Bin Laden. New York Times. 5/7/11.