We had a packed interview on July 29, 2011 with best-selling author, Gretchen Rubin, whose book The Happiness Project details the year she spent test-driving studies and theories about how to be happier.

TO RECEIVE THE RECORDING, Fill out the form below.

Gretchen also writes a popular blog, The Happiness Project in which she reports on her daily adventures in the pursuit of happiness.

Gretchen has a wide, enthusiastic following. Happiness Project groups have sprung up from Los Angeles to Enid, Oklahoma to Boston, where people meet to discuss their own happiness projects. More than a dozen blogs have been launched by people who are following Gretchen’s example.

Raised in Kansas City, she lives in New York City with her husband and two young daughters.

She says that her only hobbies are reading and writing–and helping other people clean out their closets.

In addition to writing The Happiness Project, Gretchen Rubin is also the author of Forty Ways to Look at Winston Churchill, along with Forty Ways to Look at JFK. Her first book, Power Money Fame Sex: A User’s Guide, parodied self-help books by analyzing and exposing the techniques used to exploit those who strive for those worldly ambitions.

Gretchen’s inspiration to write her international bestseller The Happiness Project came to her as she was on a bus with one of her children: Gretchen says, “A few years ago, I had an epiphany on the cross-town bus. I asked myself, “What do I want from life, anyway?” and I thought, “I want to be happy”–but I never spent any time thinking about happiness. “I should do a happiness project!” I realized. And so I have.” FULL TEXT

Rights for The Happiness Project have been sold for 31 foreign editions.

ABOUT GRETCHEN’S BOOK THE HAPPINESS PROJECT 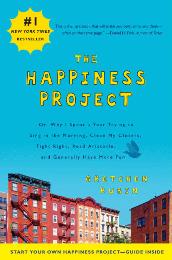 In a great review of The Happiness Project, Bob Sutton writes:

“I wondered out to look at the mail, and there it was, the result of Gretchen’s Rubin’s year long quest to make herself happier. “The Happiness Project: Or, Why I Spent a Year Trying to Sing the Morning, Clean My Closets, Fight Right, Read Aristotle, and Generally Have More Fun.” Frankly, perhaps because I was a psychology major for ten years (through my PhD in Organizational Psychology), most self-help books make me want to vomit. But once I started reading Gretchen’s book, I couldn’t stop because — unlike all those books that seem to tell fake stories about others or promise too much or are too sappy — Gretchen’s compelling voice, great stories, and first person-perspective (and brutal self-assessments at times, few of us are as aware or as open about our imperfections) make the book simply irresistible. . . .Full review

“A cross between the Dalai Lama’s The Art of Happiness and Elizabeth Gilbert’s Eat, Pray, Love, and seamlessly buttressed by insights from sources as diverse as psychological scientists, novelists, poets, and philosophers, Gretchen Rubin has written a book that readers will revisit again and again as they seek to fulfill their own dreams for happiness.”
– Sonja Lyubomirsky, Ph.D., The How of Happiness: A Scientific Approach to Getting the Life You Want

“This book made me happy in the first five pages. And the more I read it, the happier I got. It’s filled with great insights that have changed every part of my life, from love to money, from work to play, from writing to Diet Coke.”
– A.J. Jacobs, The Year of Living Biblically and The Guinea Pig Diaries

“Happiness is contagious. And so is The Happiness Project. Once you’ve read Gretchen Rubin’s tale of a year searching for satisfaction, you’ll want to start your own happiness project and get your friends and family to join you. This is the rare book that will make you both smile and think-often on the same page.”
– Daniel H. Pink, A Whole New Mind

“The Happiness Project is a wonderful book. Gretchen shows how you can be happier, starting right now, with small, actionable steps accessible to everyone. Among her many attainable strategies, her discovery of the connection between inner happiness and outer order is spot on!”
– Julie Morgenstern, Organizing from the Inside Out and SHED Your Stuff, Change Your Life