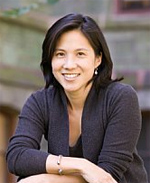 On December 16, 2011, we had a wonderful interview with ground-breaking Positive Psychologist, Angela Lee Duckworth, Ph.D., known for her original, widely heralded research on grit and self-control.

Angela received a BA in Neurobiology from Harvard in 1992 and, as a Marshall Scholar, a Masters in Neuroscience from Oxford.
Angela founded a non-profit summer school for low-income children that won the Better Government Award for the state of Massachusetts and was profiled as a Harvard Kennedy School case study. Angela has also been a McKinsey management consultant and, for four years, a math teacher in the public schools of San Francisco, Philadelphia, and New York City.

She completed her PhD in psychology at the University of Pennsylvania.

As a graduate student at the University of Pennsylvania, Angela worked with the renowned Martin E. P. Seligman. In Chapter 6 of Dr. Seligman’s latest book Flourish: Visionary New Understanding of Happiness and Well-being, he details the unusual admission of Angela Lee Duckworth to the Department of Psychology at the University of Pennsylvania. Of Angela, he says, “Here was just the right sort of maverick: someone with very high intellectual credentials and a sterling education but not housebroken enough by politics to prevent her doing serious research on the character strengths of students who succeed and the character deficits of students who fail.”

As an assistant professor of psychology at the University of Pennsylvania, Angela continues to study competencies other than general intelligence that predict academic and professional achievement. Her research centers on self-control (the ability to regulate emotions, thoughts, and feelings in the service of valued goals) and grit (perseverance and sustained interest in long-term goals). Angela says, “I am particularly interested in the subjective experience of exerting self-control and grit – and conscious strategies which facilitate adaptive behavior in the face of temptation, frustration, and distraction.”

In The New York Times Magazine Education Issue Paul Tough writes about a project on which Angela worked while a Penn graduate student. The KIPP Infinity School in NYC incorporated Angela’s research in order to move the school’s focus toward character development, particularly the development of grit and self-control.

In her ongoing work to improve the concentration and effort of children, via their using grit and self-control, Angela says that “paradoxically and wonderfully, we should free up more time for play, running around and just enjoying childhood.”

Duckworth, A., Quinn, P., Tsukayama, E. (in press). What No Child Left Behind leaves behind: The roles of IQ and self-control in predicting standardized achievement test scores and report card grades. Journal of Educational Psychology. (pdf)

VIDEOS
Why Achievement Isn’t “Normal”
Angela Duckworth on NiteBeat
Predicting Success: What We Know about People Who Achieve
Conscientious People Earn More and Save More for Retirement
A film of artist Stephen Doyle at work, taping the word grit across the KIPP Infinity school gymnasium floor and up the wall

ARTICLES AND BLOG POSTS
“Grit: It’s what separates the best from the merely good”
What if the Secret to Success Is Failure? New York Times Education Issue