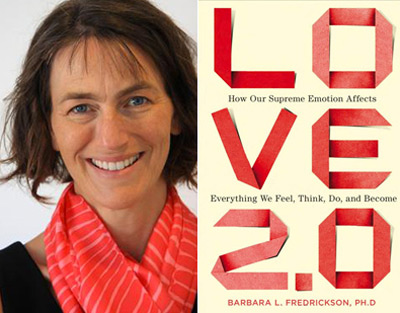 MentorCoach is proud to announce a new, cutting-edge master class.

LOVE 2.0: THE MASTER CLASS
Helping Clients Create Happiness and Health in Moments
of Connection Through the Science of Positive Emotions

Led by Barbara Fredrickson, PhD
Kenan Distinguished Professor of Psychology and
Director of the Positive Emotions and Psychophysiology Lab
at the University of North Carolina at Chapel Hill

Take this class by recording: $395

(Recorded live 9/20/13) We had a wonderful, unscripted Q&A with Barb today. Listen as she describes her passion for the class, her approach to positive psychology interventions, and her answers to questions from a global audience stretching from Australia to London to San Francisco. And Love 2.0? It’s now 135 students from 15 nations and climbing. And there’s room for you. For the recording, click here to stream the audio or download an MP3. 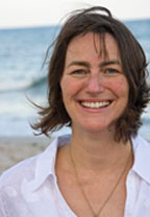 Barbara L. “Barb” Fredrickson is Kenan Distinguished Professor of Psychology at the University of North Carolina at Chapel Hill, a leading scholar in positive psychology and author of the new book, Love 2.0: How Our Supreme Emotion Affects Everything We Feel, Think, Do, and Become. What’s she like? Listen to her field questions from Ben and listeners from around the world about her new book, Love 2.0, her latest research, and her life. This was one of the highest rated interviews in our history. (80 mins). For Barb’s interview recording, click here 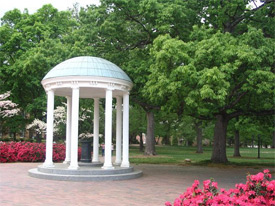 These are exciting times for us. The science of positive psychology now clearly offers evidence-based approaches for living full and meaningful lives in which our health and our communities can flourish.

This class both showcases the visionary scientific work of Barbara Fredrickson and her colleagues, and features practical applications of this science that you can put to use immediately.

Topics of study include positive emotions and love, creativity and resilience, flourishing and physical health, meaning and connection, plasticity and lifestyle change.

Through this course, you will become conversant in leading-edge theory and evidence straight from the PEP Lab, including work that measures benefits for the vagus nerve and gene expression. You will also gain experience in using lab-tested tools and practices geared toward helping you help others discover all that life can be.

Learn how love and other positive emotions can boost your and others’ energy, connections, and health, even in trying times. 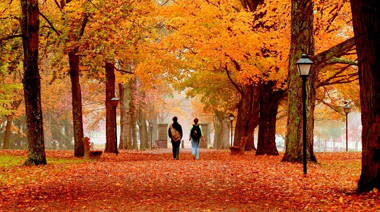 Week 3: The Mindsets of Positivity and Positivity Resonance. Discover the roots of flexibility, creativity, resilience, and oneness.

Week 4: The Fruits of Positivity Resonance. Learn to spot the wisdom and health that love uniquely nourishes.

Week 6: The Delicate Art of Pursuing Happiness. Discover the ratios and priorities that best promote flourishing and learn common pitfalls to avoid.

Week 7: Unlock Positivity Resonance in the Workplace. Learn vital skills to bring out the best in yourself and others.

Week 8: The Upward Spiral of Lifestyle Change. Deploy emotion science to set yourself and others on healthier paths.

3. What You Will Get Out of This Course: 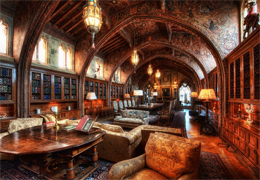 You will gain leading-edge expertise in emotion science, expertise that can help you stand out when seeking new business and new clients.

You will learn to see positive psychology interventions through the lens of emotions, which will reveal new ways to enhance and refresh those interventions.

You will practice ancient forms of meditation and learn to appreciate them in light of compelling new scientific evidence.

You will learn powerful micro-moment practices and other vital skills to unlock love, health, and happiness for yourself and others.

You will go beyond the books to learn new ways to intervene in your own life, and in the lives of others. 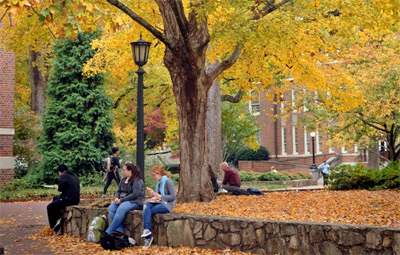 This course is for coaches, therapists, consultants, teachers, business professionals, change agents, entrepreneurs, and all those who seek evidence-based paths toward greater health and happiness, whether for themselves or for those with whom they work. 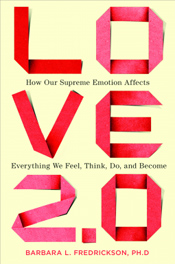 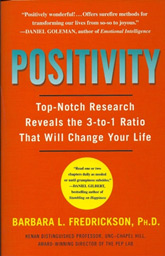 The course entails readings from two primary texts — Positivity and Love 2.0 — both by Barbara Fredrickson. In addition, each week Barb will post relevant research articles, and videos for the next week on the class’ password-protected website.

“Barbara Fredrickson offers up nothing short of a revolution….I can’t overemphasize how striking the evidence is that (she) marshals in support of her position. Not just psychological evidence, which would be important enough. But also neural evidence, neurochemical evidence, cardiovascualar evidence, and even evidence of effects on gene expression…”
–Barry Schwartz, LA Review of Books, Dorwin Cartwright Professor of Social Theory and Social Action, Swarthmore College

“Barbara Fredrickson drives home the value of being warmhearted, making the scientific case that this variety of positivity benefits our health and our connections, as well as opening our lives to new possibilities. Love 2.0 is a user-friendly manual for opening our hearts.” –Daniel Goleman, author of Emotional Intelligence

“Books on love are pretty common. I myself have written two of them. No current book can hold a candle to Fredrickson’s Love 2.0 for its stunning combination of science, wisdom and poetry. I am tempted to say that there has not been a better book on love since the New Testament.” –George Vaillant, M.D., Professor of Psychiatry, Harvard Medical School, author of Spiritual Evolution and Triumphs of Experience

“The first time I heard Barb Fredrickson speak, the famous psychologist sitting next to me said, “That’s the real thing!” This book, like Barb, is the “Real Thing:” It’s the perfect blend of sound science and wise advice on how to become happier. Barbara Fredrickson is the genius of the positive psychology movement.” –Martin E. P. Seligman, Ph.D., author of Authentic Happiness and Flourish

“Positivity is literally the feel good book of the year, providing a scientifically sound prescription for joy, health, and creativity. Read one to two chapters daily as needed or until grumpiness subsides.” –Daniel Gilbert, Ph.D., Professor of Psychology, Harvard University, Author of Stumbling on Happiness

“Positivity is filled with morsels of knowledge and practices that build pathways to flourishing for yourself and for others. For those with an appetite for solid psychological science put into the service of improving people’s lives, this book will fill you up and inspire action.” –Jane E. Dutton, Ph.D., Professor of Business, University of Michigan, and author of Energize Your Workplace

Barb will be using a password-protected class webpage that will be your home on the web for this class. In advance of each session, we’ll post her power points in multiple formats, relevant articles, videos and blog entries. Then by Wednesday evening, we’ll post the recording from that week’s class as well.

In addition, there will be a private listserv for the class that will allow students to make comments and post questions during and between classes.

Real-time Questions During Class. Students will submit questions to Barb real-time via email during the class. When she pauses for questions, Ben will read the submitted questions to her.

And by 24 hours after each session, you’ll be able to listen to the class recording online or to download a digital recording of the class to your computer and MP3 player (eg your iPod).

Thus, when you have a conflict with a particular class, you’ll have the recording, PowerPoints, and readings, and you won’t miss a thing. For the Authentic Happiness Coaching™ Program, some students had ongoing conflicts and listened to the entire class by recording. We anticipate that a number of Barb’s students in this class–for example, those living in Australia-may decide to experience the class entirely by recording, still emailing in questions to her between classes.

7. What People Say About Barb 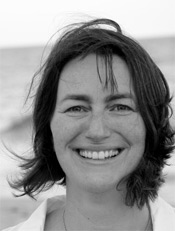 Barbara Fredrickson”The way she speaks so fluidly and simply regarding her research is just great. Her ability to link emotions to well-being is extraordinary. I can’t wait for more research findings to emerge on this.”

“The best teacher I have had to date! I loved this class.”

“The best thing about BLF is that she is so grounded and almost seems to lack all ego.”

“She provides a wonderful confluence of science (cognitive learning) and emotion (love/loving-kindness) that is applied!”

“I love her warmth and kindness, which are so evident in her voice. Her thoughtful and positive responses to questions. Her application of what she’s learned to her own life (e.g., doing loving-kindness meditation with her husband every morning; greeting others kindly throughout the day).”

Dr. Barbara L Fredrickson is Kenan Distinguished Professor of Psychology and Director of the Positive Emotions and Psychophysiology Lab (PEP Lab) at the University of North Carolina at Chapel Hill. She is a leading scholar within social psychology, affective science, and positive psychology and the author of the new bestselling book, Love 2.0: How Our Supreme Emotion Affects Everything We Feel, Think, Do, and Become.

Barb’s research into positive emotions and human flourishing has been supported by grants from multiple agencies within the National Institutes of Health for 16 consecutive years. Her research and teaching have been recognized with numerous honors, including, in 2000, the inaugural American Psychological Association’s Templeton Prize in Positive Psychology–for her theory of how positive emotions have functioned in human evolution-and in 2013, the Inaugural International Positive Psychology Association’s Christopher Peterson Gold Medal for the scholar whose career exemplifies the best of positive psychology at the personal, professional, and academic levels.

She has become one of the most highly-cited psychological scientists with over 80 peer-reviewed articles to her credit. Her bestselling book, Positivity, and her new book, Love 2.0, have been translated into nearly 20 languages, and she is regularly invited to give keynotes, courses, and interviews both nationally and internationally.

Barb’s scientific contributions have influenced scholars and practitioners worldwide, in disciplines ranging from education to business and beyond. She serves on the Board of Governors for the Center for Creative Leadership, is President-Elect of the International Positive Psychology Association, and has presented her research at White House Workshops on public policy. Her research has been featured in the New York Times, The Times of London, The Atlantic, The Economist, CNN, PBS, U.S. News & World Report, USA Today, Oprah Magazine, and elsewhere.

In her PEP Lab, Barb has investigated the effects of loving-kindness meditation (self-generated tenderness, warmth, and compassion for others) on vagal tone, a physiologic measure of emotional regulation which has been associated with adaptability, social connection and bonding if high, and risk of inflammation, cardiovascular disease, and stroke if low.

Findings suggest that people who were able to increase their vagal tone through meditation totaling about an hour a week were capable of experiencing more micro-moments of love in their days–a growing capacity to love. Focusing on increasing this kind of positive emotion can, in turn, contribute to an upward spiral of better coping responses to stress, improved health, and an ever increasing sense of connection to others. In May 2010, Barb had the honor of being invited to personally brief His Holiness the Dalai Lama on these research findings. 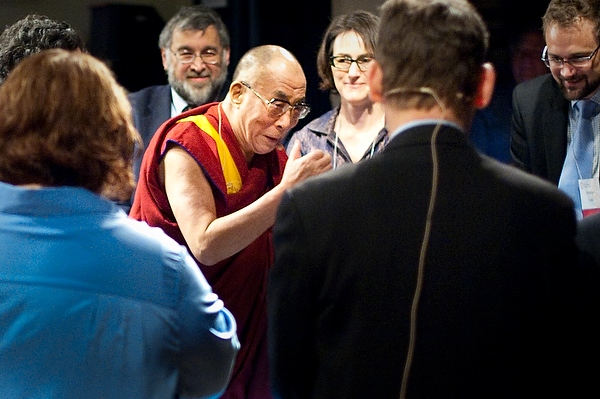 Barb lives in Carrboro, North Carolina with her husband, two sons and two cats, from whom she continues to learn about love.